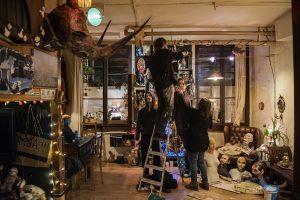 Artists Zoé Cappon and Jonathan Delachaux in their basement apartment in Geneva preparing some of the 40 figures for an exhibition to take place in Môtiers in June. Thanks to a program of art residencies backed by the Ville de Genève, the figures were completed in March at the Musée Ariana. 23.01.2021

Sang the lady in the long black dress to a masked audience on 19th April the day the theatres re-opened.

This is a record of what may already seem like ancient history, of ‘culture’ in Geneva under Covid-19 lockdown, made phantom by closed halls, vacant seats, masked streets and anxiety around the pandemic and the future.

It grew out of a conversation, and evolved organically, from artist to musician, to performer, to director, and back again, an ever-growing cast, kind enough to allow a camera-eye inside their world, during a complicated and stressful time.

The works shown here are inevitably ‘in progress’, including their false starts, and explorations, with changes of direction, of dropped songs and the sound of that half-second it takes a full orchestra to stop unexpectedly. It’s a zone we see too rarely, this process of creation, and I hope something of that creative energy is caught here. The exhibition itself reflects this process, part of an ongoing discussion, including a timeline of the process, and a projection of potential images.

All the photographs shown were taken between January and 13th April, the night before the Conseil fédéral unexpectedly announced the partial reopening of the theatres and cultural life. No one pictured here had any expectation that that would be so.

I would like to thank all the people, and institutions that allowed me access to their worlds, and to Cynthia Odier and Flux Laboratory for starting the conversation and supporting the project.